Book of the Ice 02: The Girl and the Mountain

Previous Books in the Series

Review – The Girl and the Mountain

Book one, The Girl and the Stars, ended on a cliff-hanger. Yaz and her friends were being lifted to the surface. Yaz made it to the top and was taken by the priests and the mechanism for the lift was released to drop her friends back down to the bottom of the pit. Thurin—one of three suitors for Yaz—had been left behind, in the pit.

The story is told from three main povs, Yaz, Quell, and Thurin. Yaz being with the priests in the Black Rock worried about her friends, Thurin in the pit wanting to get back to Yaz, and Quell with the others hanging perilously in the lift wanting to both survive and find Yaz.

We can view The Girl and the Mountain as a book in three stages, each of which Mark writes brilliantly.

The first part of the book focusses on events getting to, and inside of, Black Rock. Through each of the three povs Mark builds a vivid picture of the internal makeup of Black Rock with its massive network of paths, mines, and rooms filled with secrets. We meet a variety of new characters, interesting and powerful beings/machines, and learn a lot about the history of the priests, ice tribes, and plans for war—this is something Mark did wonderfully well in book one; constantly feed you history and lore in a natural way. The worldbuilding is masterful.

The second stage of the story is a perilous trek across the ice, towards the green belt. I did wonder how Mark would handle the pacing of this part of the journey. After all it’s miles and miles of ice and nothing much else, and the group are heading in the opposite direction of the ice tribes, so it is unlikely they’ll be encountered. He hadn’t left himself a lot to work with given the sparse frozen world.

“Yaz would wonder what the holothaur had found when he had tried to invade that iron head. What had it taken to set Arges forgetting his revenge and go fleeing in terror instead?”

I need not have worried. The pacing in this section is slower than in the earlier parts of the book. There is a focus on the mental fortitude of the characters trekking across the ice and the psychological impact it has on them. One more step. Keep moving. Don’t give up. Protect your friends. Leave nobody behind… or do you? These sections are well written, whether they are hunkering down for the night, searching for food, or trekking over the ice. This could have become tedious; however, Mark does a great job of intruding pace at various times in the journey. He introduces the panic of staring death in the face, that burst of adrenaline when you are fighting for your life.

The third section takes place in a city of sorts. We meet Taproot again and other city minds—this provides more insight into the history of Abeth and the motivations of the city minds. There’s a mix of science and fantasy here with a sprinkling of mythology. And Theus raises his head again, though in a surprising way. There are also more technological horrors about. The addition of science, technology, and the city minds allows Mark to really increase the pace of the story again and adds additional interest.

Finally… cliff-hanger again!!! I do believe Mark has already written book three though, so we hopefully won’t have to wait too long to find out what happens next.

Overall, this is a brilliant follow up to The Girl and the Stars. Abeth is a history-rich world of technological marvels of the past mixed with the struggle to survive of the present. Mark’s worldbuilding is second-to-none—he delivers history and lore in a way that is very natural and rich in detail and imagination, painting vivid pictures. The pacing is also great. Some people may find the middle section a little slow, especially in contrast to the first and third sections of the book, but, as I mentioned earlier, he introduces enough—in the face of death—pace at times during the trek across the ice to keep you sated, while also driving home the harrowing nature of a journey across the ice in a bleak world.­

The Masquerade 01: The Traitor Baru Cormorant 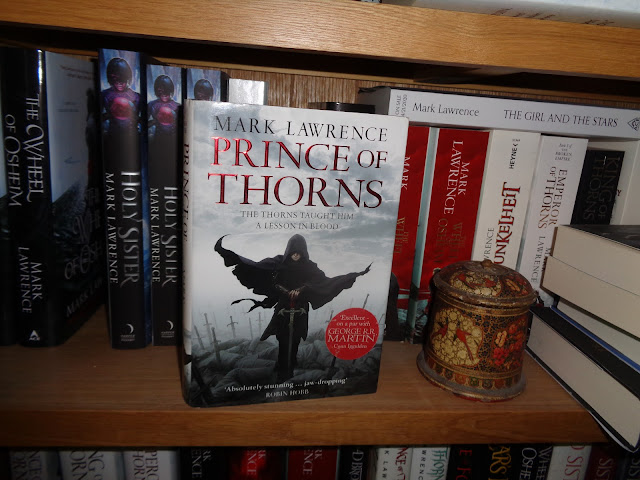