The Tiger at Midnight Trilogy 02 – The Archer at Dawn

Guest review as part of #ReadersWithoutBorders, by Scepter of Amun over at alalhambrabookreviews.

This is one of the most UNDER-RATED gems of the fantasy novel settings that I’ve picked up. In the fantasy world which is traditionally Medieval European, we are increasignly seeing Chinese/Japanese fantasy is coming onto the forefront, along with African/Arabian inspired fantasy novels, this is another fantastic addition. This book is a combination of Avatar the Last Airbender and Game of Thrones mixed into one. It has the elements of YA tropes and it doesn’t attempt to change it. Which I like. Why do I like it? Because the relationship between the two characters, Kunal and Esha will pay off at some point.

Throughout the novel, there is an intrigue of politics and backstabbing by rival factions trying to depose of a King. There’s exiled princes and long lost princesses trying to get their throne back. There is excellent world building on a scale that I am really impressed with. I can see the splendour of Ancient Indian cities similar to be described in Ancient Sangam Poetry. (Ancient Sangam Poetry refers to the Tamil Poetry of the South, in Ancient times around 1300 AD, where the Chola Empire conquered parts of South-East Asia) It is only a similarity, as the Pink City is inspired from the Pink Palace of Jaipur. There is definite elements from Rajasthan and Rajput Culture as well.

I was not impressed with Kunal and Esha’s relationship, because as much as I wanted them to be together…Esha is the Viper, an assassin style character that has lost much in her life. Kunal is a Senap, a solider who found his uncle assassinated in the previous book. And they are both young. Esha has never forgotten her love for Harun, and it seems before meeting Kunal, they would have been in an adequate relationship. Hence, I was always thinking that Kunal needed to find someone else because Esha’s past is complicated. I disliked Harun the most, but I understood his motives. There’s a whole bunch of complex relationships playing along here that I leave it to you – it all makes sense in the end. There’s a massive pay off at the end. I did feel that they are still too young and not mature enough yet to figure what they truly want. I get what Kunal did…and I really want to see how their relationship will work out in book 3.

This novel should be celebrated for the fact, that with such ease it incorporates chariot races and shows the splendour of society. I like the new combination of a mythology that is very clearly inspired from Hindusim. In terms of characters that I think needed more scenes: Alok, Laksh, and King Mahir. I really liked them and felt they needed more scenes. Vaardan was an alright character, but I really felt I needed to see way more of his cunning. The pacing was slow in some cases, but towards the end it really felt me wanting to read on more. It’s def got the right pace and the right elements in hand.

But I did agree with Kunal. All his life he’s been a solider, yet he wants more out of his life. What else can he achieve? I wonder how it will play out with Esha…but the way I’ve read this book feels like I can compare to this Kingdom of Liars by Nick Martell. Not in terms of plot, but the fact that the characters all are asking the same thing which reminds me of Iroh’s quote to Zuko:

Overall, a fantastic addition that I think needs way more attention. It’s a 10/10 from me and I do you to read this. Read Book 1 first, and then this.

The payoff at the end of Book 2 will make your mind ponder with many questions.

Oh and one more thing. As I am a reader that likes listening to music when reading. I was listening to Games of Thrones Soundtrack Dragons Theme (S7-8) and when I read through the ending, it fitted PERFECTLY. Every last moment. Every last word. The soundtrack Against all Odds fits rightly. I was hooked onto it. I just feel sadness for Kunal and Esha, and yet I still wonder: Harun will not stop at getting Esha back. Something tells me that this book series will grow much darker (not too dark) but just enough to make the heroes of this book become the villains. That’s my prediction. I hated it when at the end of Season 8, John Snow had to kill the Queen he loved. In this sense, the ending feels similar, but not too much.

This is the start of an epic journey across a fantasy land that feels unique and something I haven’t read before – I feel immersed, and feel like there’s much more to this story than what is being shown. Book III will be the unraveling of this. Every Tor Essential in 2020 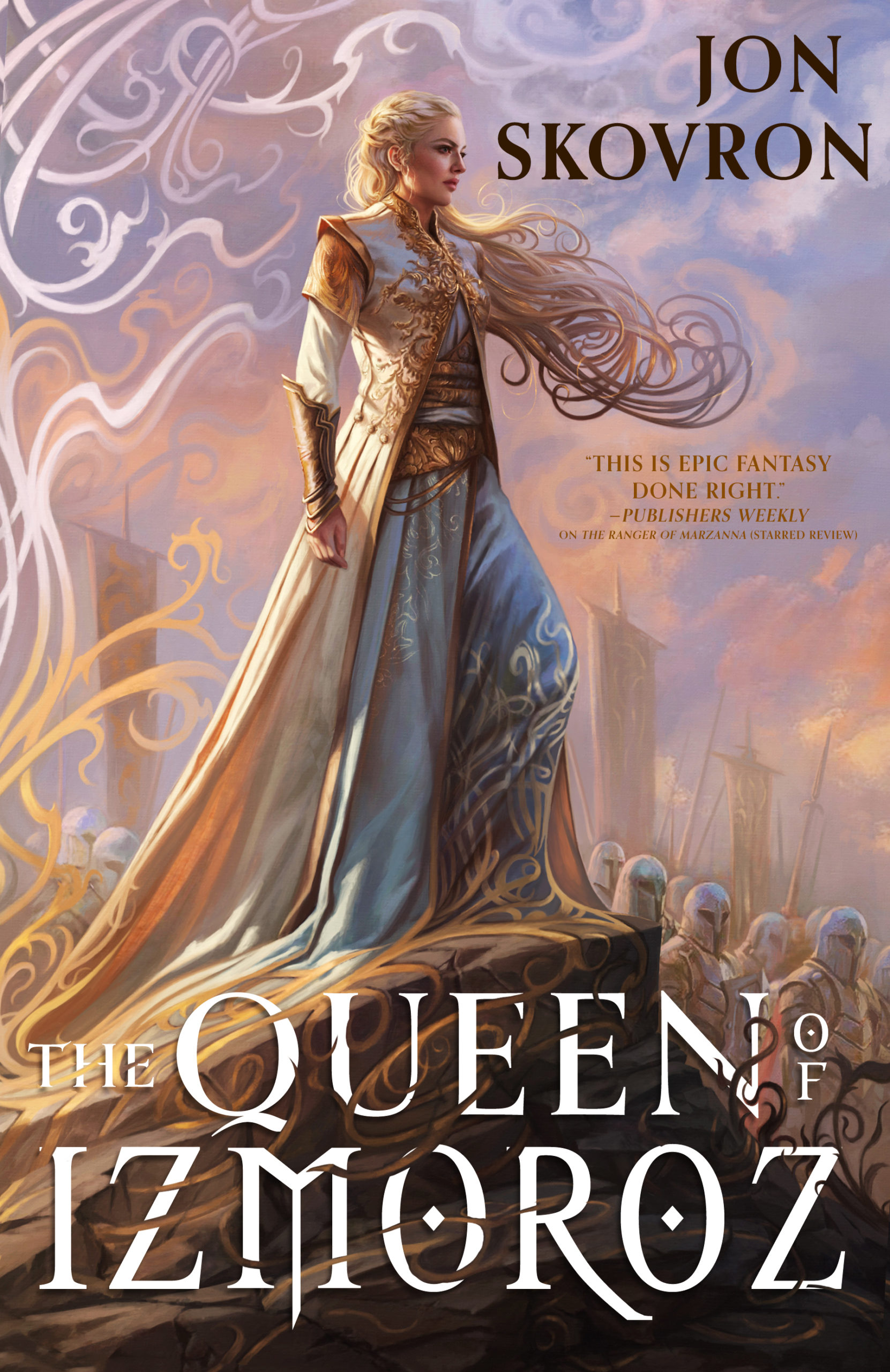 Cover Launch: THE QUEEN OF IZMOROZ by Jon Skovron