The Reborn Empire 01: We Ride the Storm

We Ride the Storm is an Asian inspired fantasy novel and the first book in Madson’s The Reborn Empire series.

The chapters move between three main characters: Princess Miko, Captain Rah e’Torin and an assassin named Cassandra Marius. I’ve read a couple of books recently which had a similar format and it impacted the reading experience in a negative way. Madson shows how to write several main characters like this in the right way. Each of the three characters is developed wonderfully well. As the chapters progress the depth of each character builds, but not just their depth, but the world around them and the sub-characters important to each story arc.

Princess Miko goes in a direction I wouldn’t have expected at the start, but once truths are exposed and lines are drawn, you must pick a side. Captain Rah e’Torin lives by a code which is challenged. And Cassandra Marius is such an interesting character As I progressed through this book, I increasingly got the sense that this would be a great epic series. The scope of the world Madson has built is wonderfully and the way she tales the tale is vivid and beautiful. The cultures are very interesting—you can see the inspiration from real-world cultures but Madson has added a sprinkle of uniqueness to them.

Each chapter was wonderfully paced, and I didn’t feel a word was wasted. There was no filler, each chapter, and the book overall, is very well structured.

I’d love to make this review more detailed, but time pressures are preventing that at the moment, so I’ll leave you with this:

We Ride the Storm is certainly a page turner which leaves you wanting more. Buy it!

Judge Dee and the Limits of the Law 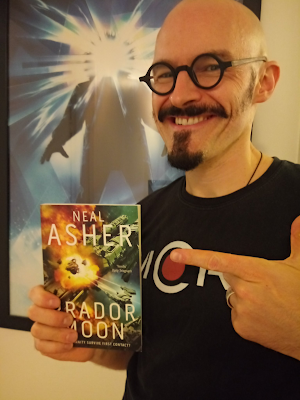 Who Reads my Books? Scott Steensma

A chat with my literary agent