The Goddess War 01: The Ranger of Marzanna

I received an ARC of the book from the publisher via NetGalley. Views are my own and are not influenced.

I have Jon Skovron’s Empire of Storms series on my TBR, which I haven’t got to you. So, when I saw Ranger of Marzanna on NetGalley I was excited to read it… especially because of that cover. Isn’t it stunning? The cover is also a great example of the atmosphere you can expect to envision when reading this book.

Ranger of Marzanna is told from the POVs of two siblings, Sonya and Sebastian. Sebastian, as it turns out is a very powerful wizard who is recruited into the Imperial army, against the wishes of his father, and moulded into a loyal subject. Sonya on the other hand if a Ranger of Marzanna—loved by the local population; fear by their enemies; and servants to Lady Marzanna, the God of Death and Winter. Lady Marzanna has the power to allow her rangers to cheat death and requests boon… but at great cost to their humanity.

This is a well-written story, which is quite slow-paced. It’s atmospheric, particularly when Sonya is in the wilderness and during the appearances of Lady Marzanna. Out in the wilderness, beyond the Tundra, is the Uaine—an interesting culture we are introduced to in the second half of the book. They remind me of how Vikings are traditionally perceived, minus the seafaring but with the addition of necromancy.

“Apparently one could survive a jump from sixty feet into a wagon filled with straw, but not without great cost.”

There are a lot of interesting aspects to this tale, like the aforementioned Uaine, Lady Marzanna and also the life of a ranger. However, there is something not quite there, though it’s hard to pinpoint exactly. As I already stated this is a well-written book, an easy read and quite enjoyable. There is a place for it, it’s like one of those 6/7 out of 10 movies that you can watch when you don’t want something too heavy that you have to think about too deeply.

The story is quite predictable, and I didn’t think the characters were particularly strong. I certainly wasn’t pulled into the book by any of them, except maybe Sonya—though there was also something lacking there. She is a badass, skilled, flippant and dedicated to both her people and way of life. It was probably the impact of other characters and interaction with her that prevented me from fully buying in. As for Sebastian, I didn’t like him. He’s weak and whiny, but not in a good way.

Two other aspects of the book bugged me. Firstly, the constant use of full names. When characters are speaking it’s fine, as in the society presented in the book it is rude to address somebody both their forename only unless they have permitted you to do so. But there is no need for Skovron to keep writing the full names outside of speech. I found it annoying. The second thing was something I don’t like seeing in any book: broken-speech. Okay, some of the Uaine are not native speakers of the language, so maybe there would be some mispronunciations, such as with names, but it was nearly every word they spoke. It’s just something I’m not a fan of. There is a character in the Lightbringer series who is the same and, though thankfully not in the books too often, and I’ve said the same about that. I know other reviewers who feel the same about that kind of thing.

Side note just before I finish the review. I’ve also added this book to the LGBTQ+ category on the blog. Though same-sex relationships are not active in the book, they are implied within the Uaine culture. I believe this is an area that will be built on in the second book.

Overall, this is a decent read. I wouldn’t recommend putting it to the top of your TBR, but if you have time then you’ll likely enjoy the book. Also, if you are looking for an easy read that isn’t too long and that you don’t need to think about t0o much, this is an ideal book for that. I will be interested in reading the second book in the series and seeing where this series goes. 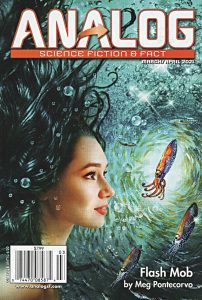 Star Wars: The High Republic’s Enemies Are Much More Chaotic (and Existential) Than You’d Expect