The Ascendance 01: Every Sky a Grave

I was sent an invite by the publisher, via NetGalley, to review this book in exchange for an honest review.

Every Sky a Grave has a very interesting premise to it. There is a language. The Deep Language, which possesses the power to destroy worlds, among many other things… but that gives you an idea of its power!

Humanity is spread throughout the universe. Cultures and technology on each planet vary, but the Order rules. If a planet deviates from what is expected and corrective measures do not work, a planet is marked to be destroyed, by an agent of the First House of the Ascendance.

Elyth, our protagonist, is a one such agent: a model agent; the best. We are first introduced to her on the planet Revik, where she infiltrates what is essentially a base and begins the process of assassinating the planet. She does this by communicating with it, speaking the Deep Language, telling the planet to die. Once this process is started there is no going back.

Upon completing her mission, she is urgently called back to begin her recovery period, which is very important. However, this period is cut short when she is sent to Qel on a secret unsanctioned mission. It is on Qel, where most of the story takes place.

I must admit, I was a bit on and off with Every Sky a Grave. There were parts where I was pulled in and others where the pacing felt off. The story became entirely too slow. I think it was around 10% into the book before a meaningful conversion took place. The mission on Revik felt too long for me. I felt it was over described and longer than it needed to be. There were several other sections in the book where I had the same feeling.

That said, there are also some excellent sections. The power of the Deep Language becomes increasingly interesting, especially as we get deeper in the book. Elyth is forced to challenge her thoughts regarding the Order and First House of the Ascendance. Challenge her beliefs. There are also a couple of good side characters, though only one felt truly fleshed out, though I know there is much more to come from him. I won’t spoil who this person is, but he and Elyth end up travelling together and it is he who challenges her perception of the world.

I was heading towards giving this book a 3* rating, but the last 25% was much improved in pace and direction. The growth and development of Elyth in this period was interesting and I loved the ending, which is why I gave it 3.5*.

Most of the way through the book I thought I wouldn’t read the follow up. However, as the ending is strong, and I really grew to like Elyth and another character, I’m certainly interested in book 2. I hope it’s as good as the last quarter of Every Sky a Grave.

On a final note, I was invited to read Every Sky a Grave because I’d previously been accepted for an ARC by Mark Lawrence: A Girl and the Stars. I don’t see any similarity in story or writing style, so I don’t buy into this being a book for fans of Mark Lawrence. A Girl and the Stars was a 5* book for me, and I’ve read several other books by Mark, though I haven’t ready any of his Impossible Times trilogy, so maybe the similarity lies there? If you enjoy Sci-fi, there’s a good chance you’ll enjoy this. There are some interesting concepts.

PrevPreviousBurningblade and Silvereye 01: Ashes of the Sun
NextThe Last Kingdom 05: The Burning LandNext

Star Wars: The High Republic’s Enemies Are Much More Chaotic (and Existential) Than You’d Expect 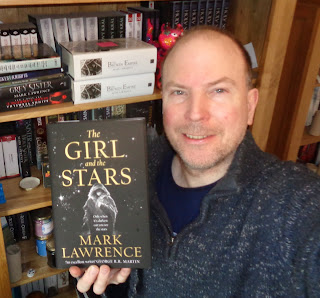 The Girl And The Stars – Giveaway!