This is the first guest review by James from The Fantasy Hive as part of Readers Without Borders.

For those who missed it, I’ve joined the #ReadersWithoutBorders charity readathon for June, all in aid of Doctors Without Borders. The readathon is the brainchild of J D Roberts at The World of SFF, and simply consists of a personal reading challenge and, for those with blogs, a blog post or two about it.

My reading challenge was to read three books that are the third book in a series (#3book3s), and in my introductory post I highlighted four candidates – of which I’ve now finished one.

Gareth L Powell is one of the UK’s best (and nicest) science fiction writers, and his current space opera trilogy, Embers of War, has received deserved praise from far and wide (see my review). His previous trilogy was an entirely different beast – in fact, a monkey.

Ack-Ack Macaque is a cigar-chomping, gun-toting, Spitfire-piloting monkey with a bad attitude and a troubled existence. First appearing in a short story, then a comic, Ack-Ack is a larger-than-life character immediately demanding more adventures – but can a cartoonish monkey sustain a sci-fi trilogy from an author looking to fill the shoes of Iain M Banks?

The answer, wrapped up in this third volume, is a qualified yes. The universe Powell creates for the monkey to play in is a veritable dumping ground of ideas – that somehow works – and each book builds on the last to create greater challenges and explore bigger ideas. Because, make no mistake, this is proper sci-fi and not just comic-book shenanigans (though it is that, too – and it would make a great anime).

Starting with a steam/diesel-punk-ish alternate near-future, we expand to a multiverse of parallel worlds – each with villains for the monkey and his friends to fight. There are human protagonists, too, rest assured, from the cybernetically-enhanced crusader Victoria Valois, to the rebel Prince Merovech, to K8 the hacker and even Victoria’s dead husband, preserved as a computer programme. The books deal with themes of reality/virtuality, individuality, responsibility, and, at the core, humanity – because what else could a book starring a monkey be about?

The third book continues the blend of fun action, deep themes, and a dash of pathos – there is a world-weariness to the characters that infects the series, despite their energy and unflagging willingness to keep on fighting. They need it, too, because Powell keeps giving them truly terrifying enemies – even, I think, throwing in some from one of his other books. This originally mystified me, coming as a bit of a shock, but it all comes together in the end, just about. Ending a series is hard, but I was glad I stuck this one out, and I’m sad to see it go.

The Mystical Art of Codeswitching 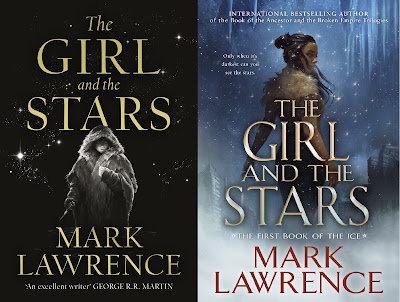 A Year In Numbers … Ten!

To Sleep in a Sea of Stars